For saltwater anglers, lure selection can make or break the day. Of all the tackle in an angler's arsenal, the lure carries the burden of both attracting and hooking fish. If you're just getting started saltwater fishing for inshore species or are looking to step up your lure game, here are five of the best saltwater fishing lures every angler needs in their tackle box.

If you find yourself in a position where you're not sure what to tie on, grab a classic bucktail jig... chances are, something will eat it.

Bucktail jigs are very simple, just a painted lead jig head hook with hair from the tail of a deer tied on the hook shank, often with a little flash mixed in.

You'll find bucktail jigs in nearly every color combination imaginable and in many different weights and sizes to cover a wide range of target species and fishing conditions.

Bucktail jigs are highly effective in places with deep, moving water. They also work well in shallow water, especially when fishing in the surf or in rocky areas. If there ever was a do-it-all lure, it would likely be the bucktail jig.

Fun fact: The bucktail jig has proven itself so reliable in catching fish that during World War II, bucktail jigs and handlines were included in survival kits for Navy pilots and sailors to use in emergency situations.

The life-like effect of a plastic swimbait cruising through the water is irresistible to species like Redfish, Speckled Trout, and Snook. Soft plastic swimbaits come in a full spectrum of sizes and colors and can be rigged and fished numerous ways according to conditions and target species.

The majority of soft plastic swimbaits used by inshore saltwater anglers imitate baitfish and have a paddle-like tail that has incredible action in the water, wiggling and vibrating as you real it in. Another popular style of soft plastic swimbait imitates a shrimp and is known to be especially deadly on Speckled Trout when fished under a popping cork.

Soft plastic swimbaits are incredibly versatile and can be fished at nearly any depth. The best way to rig a soft plastic swimbait is on a jig head, sized accordingly to how deep you want to fish. Most of the time a simple cast and retrieve approach works well for swimbaits, but more finesse and varying retrieve techniques can be used to great effect.

A particularly potent way to imitate fleeing baitfish is with a classic spoon lure. Out of the water, a spoon lure doesn't look like anything a fish would eat, but in the water, it wobbles as it's retrieved creating a flash that predatory fish can't resist.

Spoon lures are available in colors like black, pink and chartreuse, but silver and gold are the go-to colors for most inshore anglers.

There are many different styles of spoon lures, but the most popular for inshore fishing are those with treble hooks that trail off the end and those with single hooks fixed to the spoon, the latter being particularly effective for Redfish. Spoons are fished with a simple cast and retrieve and are great when fishing for spooky fish as they land very softly in the water.

Taking cues from Bass fisherman, saltwater anglers have adapted the use of spinnerbaits to target inshore species with much success.

Spinnerbaits don't imitate anything in particular, but they vibrate like crazy when pulled through the water, and predatory fish pick up on them easily with their lateral lines.

While you can use the familiar skirted spinnerbaits used by bass fisherman, most saltwater-specific spinner baits use a soft plastic swimbait on a jig head attached to a spinner blade with a wire. Saltwater spinnerbaits also use stronger hooks and hardware to handle the heftier fish in the salt. Redfish are the primary species anglers target with spinnerbaits but are known to catch Speckled Trout, Flounder, and Snook as well.

There are few moments in fishing more exciting than an aggressive topwater strike. Watching a wake form behind your lure followed by an explosive strike will get any angler's heart rate up.

For this exciting style of fishing, top water plugs and poppers are some of the best saltwater fishing lures for the job.

Plugs float on the surface of the water and are designed to imitate a baitfish fleeing attack. Poppers are simply plugs that have a concave face that create a "pop" or a splash when pulled through the water. Many top water plugs for saltwater have rattles inside that create extra noise on the surface and can attract fish even more. They are available in many sizes and colors, but most have lighter colored belly's, usually silver or white, just like bait fish.

One of the most effective ways to fish topwater plugs for inshore species is what's called 'walking the dog' where you twitch the tip of your rod as you retrieve causing the lure to swim erratically. This technique can take some time to get used to but pays off in vicious attacks from your target fish.

Half the fun of fishing is picking out all the gear and tackle you need, and with so many great lures to choose from, you'll feel like a kid in the candy store. If your tackle box is a little lean, use this list of best saltwater fishing lures to stock up so you're ready to catch anything with fins.

Will fishing be good tomorrow?

Can fishing line be recycled?

Winter Fishing for Bass: how to fish in cold weather

KastKing Rover Round...
Buy on Amazon 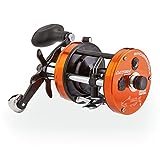 Can You Eat Saltwater Catfish? Why or Why Not
Braid vs Mono: Which One is Right For You
Fly Fishing For Redfish: 5 Tips For Catching Reds on The Fly
Best Saltwater Spinning Reels Under $200 in 2019 [Buying Guide]
Kayaking With Alligators: What Every Kayaker Should Know

Will fishing be good tomorrow?
Can fishing line be recycled?
10 Gifts for the Fisherman Who Has Everything
10 Best Winter Fishing Gloves in 2020
Winter Fishing for Bass: how to fish in cold weather
%d bloggers like this: